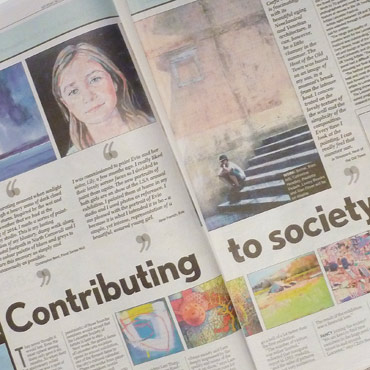 The following is taken from the article in Leicester Mercury on 1 November 2014.

They never thought it would last. Even the most upbeat among them only gave it six months. So when their first anniversary rolled round, there was a lot of back-slapping going on.. . .“The committee feel that the mere fact of its existence is a subject of congratulation”, read the report at the annual general meeting. “We feel that the infant society is now fairly on its legs”. That was in 1882. One hundred and 32 years on, it’s safe to say that even the most pessimistic of those founder members would accept that the Leicester Society of Artists is here to stay.

Next week, the grande dame of Leicester arts societies opens its annual exhibition, one of the firmest dates in the city’s cultural calendar.  There are works from painters, print-makers, textile artists, sculptors and ceramicists – more than 150 pieces in total, drawn from more than 70 artists, taking over two gallery spaces at New Walk Museum & Art Gallery, with a selection of work displayed next to the café.

It’s the first exhibition on the watch of the society’s new president, Lars Tharp, the BBC’s Antiques Roadshow expect from Leicester, who takes over from the outgoing architect and artist Douglas Smith.

“I am honoroured to be elected president of this vibrant society and I am deeply impressed by the quality and talent of the work on show,” says Lars… . .

Fancy joining the society? “We are keen to find new members I the huge pool of talent in and around Leicester,” says Chris Bent, co-chairman of the LSA. “We are always interested in meeting new artists.”